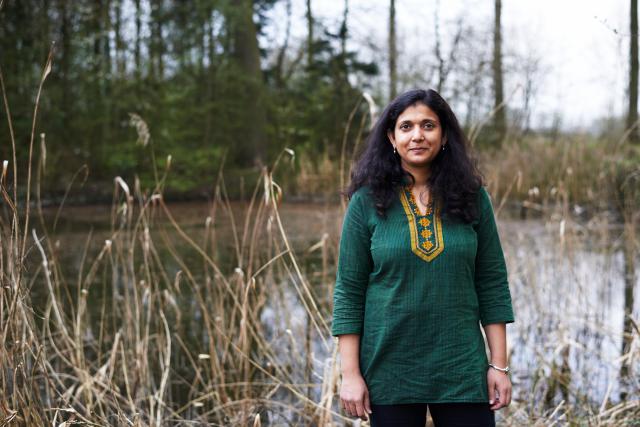 It was love that brought Smitha Kumar to Ghent. She met her husband, who was born

in Ghent, when he toured India in 1999. They have now lived in Ghent for thirteen years and only recently became a family of three.

lived with her mother-in-law for the first year – was a real culture shock. Smitha remembers how she arrived on a rainy day in March, a few days before the wedding of an uncle. At the austere ceremony in the Town Hall, where sure enough the rings were forgotten, she was the only guest wearing a colourful, festive dress. After ten minutes the ceremony was concluded, while in India festivities go on for three days!

Nevertheless, she soon grew to love her new home and the life she built for herself here. In

2002 she decided to realise an old dream she brought with her from India and study veterinary medicine. She liked the ‘small world’ of the campus in Merelbeke. Compared with India, education here is much more interactive, up to date, and practically oriented. Subsequently, she completed her PhD at the Faculty of Medicine. She hopes to complete her current research on asthma in 2015.

She is not involved in the Indian community in Ghent and, except for art and some

personal items, there is little that reminds her of her homeland. She feels at home here with her family and cannot imagine her daughter ever growing up in India.

‘What do I miss about India?’ After much insistence, she admits there is something she

does miss. In Bangalore Smitha used to walk her dog every night. On the hill, where an ancient temple stood, they would watch the sunset and it was always different. Yes, she sighs, she does miss that sometimes. But nothing else.