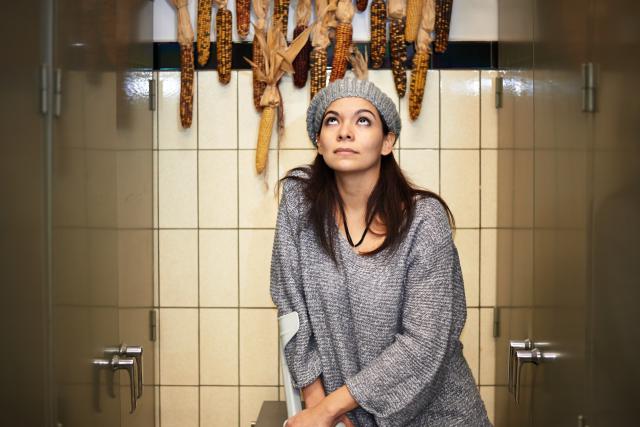 history too. Eight years ago in the final year of her bachelor course in food technology, Daniela met Professor Patrick Van Damme from Ghent. From the outset, she was impressed by his knowledge, which was very different from what the Ecuadorian professors had taught her so far. After a rigorous selection process Daniela was one of the students selected to go to Belgium, where four years later she started her PhD.

In Ghent Daniela had little contact with other Belgian students. Ecuadorians are very

social and open, making it difficult for them to accept the restrained and reserved character of the Belgians. A few years later she met Michael in a student home in Ghent. It clicked right away. Michael’s father loves Ecuador and even as a child Michael travelled there frequently. In him Daniela finds a little piece of home. The Alpaca rug that brightens up their flat at St. Jacobs is one of the souvenirs that Michael’s father once brought home with him.

Together they have a dear little child. Amankay is two years old and is named after a rare

flower that only grows in the Andes. In the Ecuadorian culture, the double role of scientist and mother are incompatible. Mother and child are always together from birth. For example, as Daniela explains, mothers in Ecuador work on the land and carry their new-born babies on their backs. Consequently, she has had a very hard time adjusting to the Belgian ‘nursery school culture’ and leaving Amankay there during her working hours. Because she wants to be both a full-time mother and a scientist, life can sometimes be hard for her.

Daniela’s interest in food and agriculture started when she was still a child. Her grand-

parents were still members of the original indigenous people of Ecuador who relied entirely on nature for their survival. At home in Ecuador she and her family would eat the fresh fruit they reaped in the forest or planted and harvested on their land. In her research, Daniela also promotes the healthy power of a natural life. She dreams of returning to Ecuador with Michael after completing her studies and establishing a school that teaches children to eat and live in nature. What is Daniela’s advice? ‘Do what you love to do. The rest will follow.