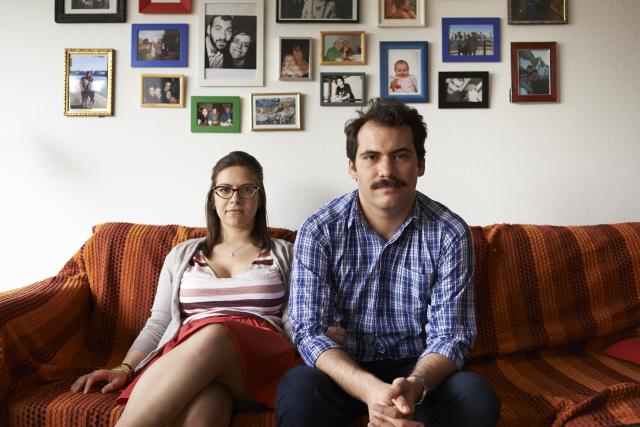 Maria Lucia and Antonios not only stuck in Ghent, but also to each other. On a winter's

afternoon filled with espresso and dolce they tell us how they met in the international community of foreign PhD researchers here in Ghent: through language courses and foreign colleagues at the department you automatically end up here. It was at a mutual friend’s dinner party that there was a definite spark. Things could have turned out very differently. After obtaining an engineering degree in Turin, Maria Lucia sent her resume to several universities. She wanted to do her doctorate, as well as scientific research, and enjoyed a little adventure, especially if it paid well. She could have found herself in Berlin or Delft, but for purely practical reasons, she ended up in Ghent. Antonios, on the other hand, met a friend in Denmark who had obtained his master’s diploma in Ghent. This was the final stimulus necessary to apply for a project at the Faculty of Bioscience Engineering. Before he knew it, he was settling in at the building along the Coupure canal.

The first time it snowed, their love for Ghent cooled a bit. They missed the typical

Mediterranean lifestyle, like the night life; after all these years they still haven’t managed to have dinner before nine o’clock in the evening. But otherwise Maria and Antonios are very happy here. Sometimes they get into their car and drive around, exploring Belgium, the country where their first child will soon be born. In the international community and the university English is spoken, so they haven’t made too much of an effort to learn Dutch. But later on, at the day-care centre and school they will have to be able to speak Dutch. So they are taking a language course. Antonios says that this is one of the many sacrifices necessary for the new life to come.

family will continue to live in Belgium. Returning to Greece is, economically speaking, not an option, and if he has to choose between Italy and Belgium, he greatly prefers the quality of life of the north. Social security, to name just one example. For Maria it is much more difficult. She misses her family and the small town where she comes from. She is sad she has so few Belgian friends and there is not much integration. Despite the nice job she has, she is homesick. During her PhD studies she was able to fly back and forth almost every month, but now that she is working this is no longer possible. The baby, she says, has changed everything.