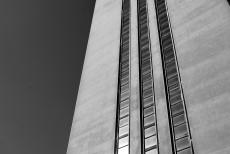 'Powerful symbol of science', 'violation of Ghent's airspace', 'symbolic lighthouse', 'academic erection', 'cathedral of knowledge' ... The perception of the Book Tower varies. The citizens of Ghent have to get used to a fourth tower on their city skyline.

It remains a masterpiece all the same. Architect Henry van de Velde has designed a Modernist work of art. Both the interior and exterior of the university library consist of a combination of horizontal and vertical axes. Viewed in its entirety the tower looks sober, balanced and powerful. This is exactly the impression the university wants to radiate in the 1930s. The contrast with the old, cold and damp Baudeloo Library, which the university shares with the city, could not be greater. Choosing a tower for the new university library is not obvious. Van de Velde needs to do a lot of persuading for his 'oversized bookcase'. The former head librarian, for instance, is not in favour of it: the distribution of books is difficult to organize in a building with 20 floors.

The size of the tower has more or less survived the explosion of 20th-century knowledge. Today it holds approximately three million books, periodicals and manuscripts. But overall, the condition of the building is poor. Decades of neglect and improper repairs have taken their toll and the building is up for a long restoration.

Next: interlude about the relationship crisis