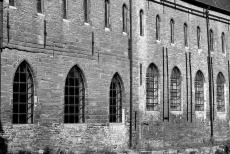 If you walk from the Aula to "het Pand" you cross the the commercial heart of Ghent. Today many clothes shops line the Veldstraat, but in the middle of the 19th century, the selection is much more diverse. The new presence of the university and its scholars leads to an increase in the number of book shops, instrument builders and pubs in the neighbourhood.

The large striking grey building along the canal is called "het Pand". When the university acquires the old Dominican monastery in 1963, it is in disrepair. Because of its lamentable state as a grimy tenement, the people from Ghent call it the Vlooienpaleis, Dutch for 'Palace of the Fleas'. The University of Ghent initially wants to turn the monastery into a new residency for students. But the Department of Monuments of Ghent doesn’t agree. It thinks that, after 750 years of turbulent history, the monastery deserves better!

One such episode in the building’s history takes place between 1580 and 1584. During four years it accommodates a Calvinist university. In this 'first University of Ghent' Protestant pastors are trained. Although this university does not last long, the city uses the early presence of a university as an argument 230 years later in lobbying for the state university.

Instead of becoming a student residence this 'éminence grise' undergoes a long and thorough restoration. Today the old monastery is the cultural centre of the university. It houses the communications service, a restaurant, the Faculty Club, several conference rooms and three historical collections. The entrance is just around the corner. Please do visit the building on another occasion. However for now, let’s continue our walk.

Next stop: Courts of Justice