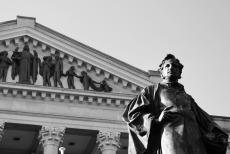 In front of the Courts of Justice, we face Hippolyte Metdepenningen. A citizen of Ghent, Metdepenningen was a lawyer, journalist, politician and a freemason. He helped to establish the Liberal Party in Ghent. Not bad for the first alumnus of the University of Ghent! Metdepenningen’s career is not the only one of note. 19th-century Ghent needs intellectuals, judges and doctors and the alumni from the University of Ghent are quickly absorbed into the elite of the city.

The bronze statue of Metdepenningen has most certainly seen a fair number of students enter the impressive courthouse with their tails between their legs. The student’s combination of youthful ambition and continual beer swilling can become quite a nuisance for the residents of Ghent. All in all, it’s typical of a college town. If you read through old student journals, a night out seems to be a success only when the citizens of Ghent shout at you or you are chased by the police. A student who enrols at the university in the 19th century and is found guilty of night-time nuisance, alcohol intoxication or defamation against the police, will spend a night in jail. The basement of City Hall even holds a separate ‘carcer academicus', a dungeon for academics!

Let's have a look at the Courts of Justice themselves. Are you familiar with the columns by now? Like the Aula, this neoclassical building is designed by Louis Roelandt. The city is so pleased with Roelandt’s university building that they promote him to the post of City Architect. Besides the Aula, he also designs the Courts of Justice, the Opera, the Casino at the Coupure and St. Anne's Church.

From 1835 onwards, Roelandt continues his work as the city's architect, while holding a professorship at the university. Roelandt is a real entrepreneur and convinces the city to use gas from his gas plant to illuminate the streets of Ghent. The professor has therefore determined the streets of Ghent in more than one way!