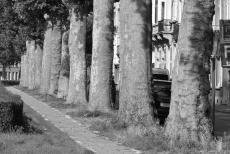 You now have a view of one of the most exclusive residential sites in Ghent. The Coupure, nearly a mile long, is lined by lime and plane trees. Here, you will find the most refined houses and mansions in the city. The houses are built by the 19th-century jet set of Ghent. The elite is attracted by the mix of vast fields, windmills and well-maintained buildings. Among the elite you can find owners of factories, entrepreneurs, doctors, judges and ... professors. Between 1841 and 1992, as many as sixty professors have lived here!

The professor’s residence is more than just a private home within walking distance of the university buildings. The professor has his study there, his library and his private practice. It often happens that students grow familiar with the house of their mentor and, besides the private collection of books, take an interest in the daughter of the house too. It is remarkable how many family or political ties are forged between the families of professors: true academic dynasties emerge such as the families Fredericq, Kluyskens and Storme.

Not only do the Ghent elite enjoy the Coupure. The place becomes the favourite "promenade" of students and citizens of Ghent alike. A green oasis that has escaped the factory smoke of the inner city. The Coupure is the starting point for long walks along the Lys. At the Coupure, students rent rowing boats for playful romantic getaways to Drongen and Sint-Martens-Latem.

Since the cargo ships are diverted around the city centre along the ring canal, things have grown more relaxed at the Coupure. The giant factory depots have gone as well as the shipping. Nowadays, the largest building at the Coupure is the Faculty of Bioscience Engineering. However, you cannot see it from where you are standing right now. Even though the university employs more professors than during the 19th century, you'll be unlikely to find one here. There are plenty of students along the Coupure though. Not rowing but jogging. Often in a trendy sweater of UGent!