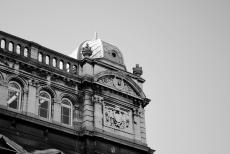 Christmas 1881. Three hundred families from the neighbourhood of Batavia are told that they have to make way for a new university building. The city does not really care where the workers move to. The main concern is that the impoverished neighbourhood - a threat to public health - is cleaned up!

The Institute of Science opens ten years later. Covering an area of 14,700 square meters, it is one of the largest buildings in Belgium. Because narrow streets surround it, you cannot have a complete view of it. But it is truly gigantic in size.

And once again, the building has been designed by a City Architect and professor. Adolphe Pauli devises a building that is packed with 19th-century science laboratories, classrooms, workshops and offices. There are two entrances. The one in the Plateaustraat provides access to the engineering schools. The lush facade of the building recalls the majestic grandeur of this education: in the 19th and 20th centuries, Ghent engineering schools are renowned all over the world. The second entrance to the complex is located in the Rozierstraat and provides access to the Faculty of Sciences.

Nobody could foresee how quickly the numbers of sciences and students would increase during the 20th century. Despite its monumental size, by 1905 the Plateau building is already too small. The building has been in a constant state of transition ever since: levels are split, courtyards filled with smaller buildings, basements used and units moved. The Plateau building has become a virtually impenetrable maze. Generations of students got lost here.