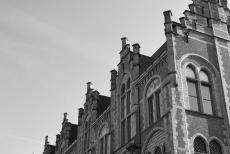 For a long time the city hospital was located in the neo-Gothic building with the glass entrance. Initially, it is here that the students of the Faculty of Medicine practise their medical skills. Interaction between city and university has nowhere been as intense as here.

The confrontation with the misery of the workers from Ghent must have been quite a shock to many students. For the professors, the patients were a constant motivation in their quest for improved diagnoses, better remedies and more accurate treatments But nowhere interaction has been more problematic either. The ongoing difficulty lies in sharing and distributing tools, patients and corpses. These are needed for educational purposes, but the city doctors do not like to share them. The two parties also often question each other's diagnoses. Not very conducive to the health of patients...

Things improve considerably when the university opens its own medical institutions in 1905. The Rommelaere complex is located across the street. The building is notable for the coloured stone facade and frivolous turrets, the trademark of City Architect, Louis Cloquet. Patients who want to be examined and treated by university doctors can now visit this Rommelaere complex. For nursing and hospital healthcare, patients have to go to the Bijloke. This means that every day patients are moved from one building to the other. It’s a very bumpy route!